Tinnitus is the perception of sound within the human ear in the absence of corresponding external sound. Tinnitus is not a disease, but a condition that can result from a wide range of underlying causes: neurological damage (multiple sclerosis), ear infections, foreign objects  in the ear, nasal allergies that prevent (or induce) fluid drain, or wax build-up. Withdrawal from a benzodiazepine addiction may cause tinnitus as well. In-ear headphones, whose sound enters directly into the ear canal without any opportunity to be deflected or absorbed elsewhere, are a common cause of tinnitus when volume is set beyond moderate levels.

Tinnitus may be an accompaniment of sensorineural hearing loss or congenital hearing loss, or it may be observed as a side effect of certain medications. However, the most common cause is noise-induced hearing loss.

As tinnitus is usually a subjective phenomenon, it is difficult to measure using objective tests, such as by comparison with noise of known frequency and intensity, as in an audiometric test. The condition is often rated clinically on a simple scale from “slight” to “catastrophic” according to the practical difficulties it imposes, such as interference with sleep, quiet activities, and normal daily activities.

Tinnitus can be perceived in one or both ears or in the head. It is usually described as a ringing noise, but in some patients, it takes the form of a high-pitched whining, electric buzzing, hissing, humming, tinging or whistling sound, or as ticking, clicking, roaring, “crickets” or “tree frogs” or “locusts (cicadas)”, tunes, songs, beeping, sizzling, sounds that slightly resemble human voices or even a pure steady tone like that heard during a hearing test. It has also been described as a “whooshing” sound, as of wind or waves. Tinnitus can be intermittent, or it can be continuous, in which case it can be the cause of great distress. In some individuals, the intensity can be changed by shoulder, head, tongue, jaw, or eye movements.

Most people with tinnitus have some degree of hearing loss, in that they are often unable to hear clearly external sounds that occur within the same range of frequencies as their “phantom sounds”. This has led to the suggestion that one cause of tinnitus might be a homeostatic response of central dorsal cochlear nucleus auditory neurons that makes them hyperactive in compensation to auditory input loss.

The sound perceived may range from a quiet background noise to one that can be heard even over loud external sounds. The term tinnitus usually refers to more severe cases. Heller and Bergman (1953) conducted a study of 100 tinnitus-free university students placed in an anechoic chamber and found 93% reported hearing a buzzing, pulsing or whistling sound. Cohort studies have demonstrated damage to hearing (among other health effects) from unnatural levels of noise exposure is very widespread in industrialized countries.

As with all diagnostics, other potential sources of the sounds normally associated with tinnitus should be ruled out. For instance, two recognized sources of very high pitched sounds might be electromagnetic fields common in modern wiring and various sound signal transmissions. A common and often misdiagnosed condition that mimics tinnitus is Radio Frequency (RF) hearing, in which subjects have been tested and found to hear high-pitched transmission frequencies that sound similar to tinnitus.

Why Does Tinnitus Cause These Symptoms?

 The Brain Interprets the tinnitus as a danger.

The sympathetic nervous system triggers the fight or flight response.

The graphic below demonstrates the typical cycle of tinnitus: 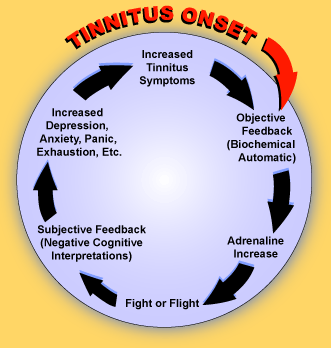